OS X is a bit retarded, but what the rest of the world thinks Home / End should do, Mac users can achieve by pressing Shift + Home / Shift + End or Control + A / Control + E respectively. I’m talking about how to move your cursor to the beginning or end of a line, of course!

If you’re on one of those special midget keyboards (a laptop?) that lacks useful buttons like Home and End, you’re probably looking for Shift + Fn + Left / Shift + Fn + Right.

There are a bunch of ways you can remap the key bindings, but in the interests of staying sane when working on others’ machines, it’s probably worth changing your muscle memory instead of your bindings here. It’s also worth noting that Vim users can use ^ / $ for beginning / end of line respectively.

All existing apps and their data on the iPhone will be replaced with apps from this iTunes library.

If you’re setting up a new computer and have Authorized This Computer (Store -> Authorize This Computer) already, it seems weird that iTunes won’t let you just sync your apps from the device.

For whatever reason, you ALSO need to “Transfer Purchases from” the iPhone or iPod in question. Crazy huh? Nevertheless, it’s actually pretty straightforward. 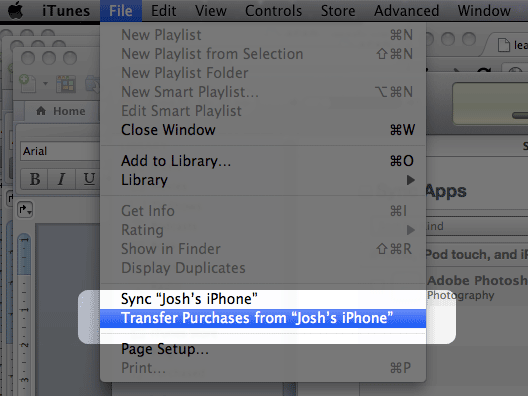 On running Firefox 4 for the first time I was shocked to mouseover a link and apparently not be able to see where I was going. Had they banished the status bar? Of course, everyone’s just playing catchup to Chrome’s UI, and its status bar isn’t really a bar at all – it just appears as and when it’s needed. Perfect.

The way it's meant to happen!

As and when typically just means “right before you click on a link”, with the whole thing triggered by mouseovers. The first page Firefox loads when you start the browser is available here – http://www.mozilla.com/en-US/firefox/4.0/firstrun/ – can you see what’s wrong with it?

I love event-listenery JavaScript as much as the next guy, but the icon on Step 2 suggested I’d be going to another page (c’mon, that’s just what right angle quotation marks have been co-opted to mean on the web!) while the browser wouldn’t say where.

Before visiting any actual pages in Firefox, not much trusting it at this point, I did some quick Googling and discovered two things:

Of course, if I’d bothered to actually USE Firefox for 2 minutes–trusting it even though it wouldn’t tell me where links were pointing–I’d have discovered that ordinarily it does. Pie-faced, I retreated to blogging angrily about how Mozilla’s first run screen is a great HTML5 page but a horrible initial demo of the browser’s capabilities.

A few observations from this: 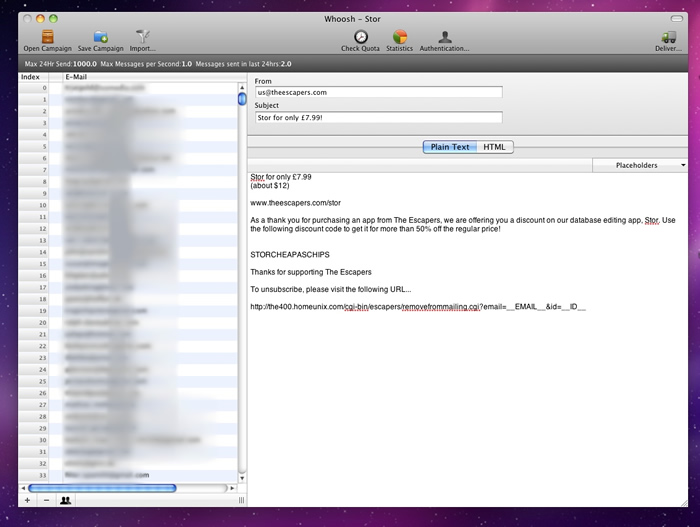 After spending a day and a bit last week hacking together a simple mailer (with merge capabilities) for Amazon’s Simple Email Service (it’s really pretty simple) it struck me that there must be a better way to do this. I toyed with launching a web app for others to use to simply accomplish the same thing, but figured someone, somewhere, must’ve already done something substantially similar.

Turns out they have. Perfect.

For us, SES was a great way to send once-off personal mail beyond the volume that our Apps for Domains accounts permit. The biggest downside was Amazon’s rate limiting — something that still applies for this app.

This app would’ve made the process a lot quicker, though I’m not sure of its value for regular list emailing — which seems to be how they’re marketing it. You’re not just paying to send emails with MailChimp/Campaign Monitor – you’re paying for deliverability and list management. AWS give you the deliverability side (at least, that was our experience) but do nothing to help you with unsubscribes, updates, and tracking.

That said, if I’d found this a week ago…

To install Yii for the first time, the README suggests you should run the following command:

Unfortunately, for most users this will result in an error along the lines of “bash: ./yiic: Permission denied” unless you first make yiic executable.

The easiest way to do this is to run the following command in your framework directory: